Christina Bezari is a PhD candidate at the Department of Literary Studies of Ghent University. She has obtained a Bachelor’s degree in translation studies at the Ionian University of Corfu and a Master’s degree in comparative literature at the University of Sorbonne (Paris-IV). Her general areas of research interest include literary theory, philosophy of language and literary translation with special focus on Greek, Italian, French and German poets of the late eighteenth, nineteenth and early twentieth-centuries. More specifically, her work on Friedrich Hölderlin, Gérard de Nerval, Dino Campana, Antonin Artaud and Maurice Blanchot has appeared in international, peer-reviewed journals. She has also co-organized an international conference on The Imaginaries of Translation at the University of Sorbonne on the 3rd and 4th of March 2017. Her doctoral research focuses on Southern European women editors of literary periodicals. 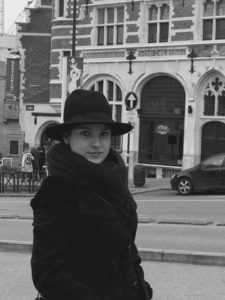