Sonja Lavaert obtained her PhD in Philosophy and Moral Sciences from the VUB with the dissertation Het perspectief van de multitude published in 2011 by VUBPress. She is a member of the Centre for Ethics and Humanism and the Brussels Institute of Applied Linguistics. She teaches Early modern philosophy and Philosophy of the Enlightenment in the Philosophy department. In the department of Applied Linguistics she teaches Language and society, Language, text and image, and Ethics/Deontology and Translation. She published on early modern political philosophy, radical contemporary philosophy, critical theory, philosophy of art, and translation studies, and she is the co-editor of The Dutch Legacy: Radical Thinkers of the 17th Century and the Enlightenment (2017). Her research looks into the genealogy of political and ethical concepts in the interdisciplinary area of philosophy, language, literature, and translation from the present, the late 17th century and early Renaissance, particularly but not exclusively in the Netherlands and Italy. 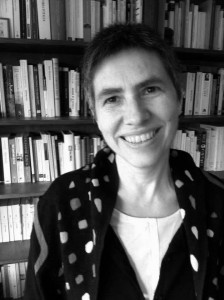